Luke Alessi has released music on labels such as Stil Vor Talent and Mobilee Records.

Luke Alessi is a talented DJ and producer from Melbourne who is well known on the Australian club scene. He has also reached international audiences with his releases on influential record labels, and we are honoured to have this exclusive mix from him. Keen to learn more about his background in music we also invited him for a quick chat…

Hi Luke, how did you find the 3:33 format what was the vibe/energy you were trying to capture?

I found the 3:33 format an interesting challenge. It’s one thing to play a full 3 and a half-hour DJ set to a live audience, feeding off the energy in the room, but to play one by yourself is completely different. I tried my best to portray the ideal 24 hours of music that I’d like to hear at a festival in 3 hours and 33 mins, with all the different vibes that come with it. From day time to night time, morning to sunset and everything in between.

At what age did you first find your love for music, and when did you start DJing/producing?

I probably established my love for music at a very young age when going for long car trips with my family to different holiday locations, telling my Dad (who is also super into music) to blast the CD or cassette he was playing. I started DJing at the age of 18.

The places we grow up in, various locations and cities can have a powerful effect on our creative energy. Tell us a bit about Melbourne (or other cities) and how you feel they have influenced your sound and direction?

This is very true. I tend to get super inspired when I’m traveling a lot and visiting different places around the world. So I’d say now more than ever due to lockdown and the inability to travel that I’ve been especially influenced by the Melbourne scene. Melbourne to me has always been super high energy, go go go and dominated by it’s cafe and nightlife culture. I’d say as a result I’ve been making some more high energy, straight to the point music as opposed to some more patient, drawn out, floaty numbers that might come out of me when I’m surrounded by coconut trees and sandy beaches.

What’s one track that never gets old for you no matter how many times you play it?

There are so many to choose from, but I suppose one that comes to mind that I’ve been playing a bit lately is Europa by Pryda, it’s an oldie that just seems to get better with age. Every time I play it the crowd goes off!

What is one of your all-time favourite gigs, one that stands out big or small?

I recently played a party under the Bolte bridge with my good friend Gumm that was a bit of a renegade party after the recent announcement of dancefloors closing. It was just a couple of PA speakers, a sub, a markee and a wild bunch of about 300 people having a rave and you could just tell they were so deep into the music that it just made playing such a joy. I think this comes close to my favourite party.

Outside of DJing & producing music, how do you spend your time?

Well, I recently bought a house with my partner that we are renovating so that’s currently taking up a whole bunch of my time. But otherwise, if I’m not making my own music I’m tutoring music production, walking my dog, exercising or hanging out with friends & family.
• What’s next on your schedule, any upcoming gigs or releases or something else you would like to mention before we finish? Yeah so after a bit of a lull in gigs due to covid things are finally on the up and I’ve got a bunch of exciting shows coming up in March! I’ve got a gig at HABA bar in Rye on the 6th of March, then I finally get to travel back to Sydney to play a boat party for Float on March 19. I also have 2 other MASSIVE shows that I can’t announce just yet but one is a dream festival of mine at my dream set time and the other is supporting 2 of my favourite artists… Both are in March so that’s a big month.

On the music front, I’m currently working on my follow up release with Mobilee and just signed a 3 track ep to Buttress records which is run by some of my favourite artists Musumeci, Lehar and Enzo Elia which I’m very excited about. I’m also working on a special remix at the moment for an act I’ll be touring with later this year. So exciting times! 🙂 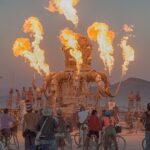 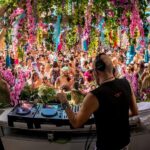