Bonjour Ben is a German artist who is well known for his deep and sensual style that blends deep sounds with organic percussion and soothing melodies.

Playing regularly at clubs and events across Germany, he is also known on the international club scene and has played events such as the AfrikaBurn in South Africa.

He is a rarity in today’s electronic music scene as he is a DJ who has made a name for himself without also producing tracks, and that’s largely down to his exceptional talents behind the decks.

Hi Ben, thanks for recording us a podcast, could you describe the vibe/energy were you trying to capture with your track selection?

Next month will mark the start of the festival season in Germany and Europe in general. It will hopefully be the first summer for two years without corona restrictions. I’m very much looking forward to it, and I tried to capture my excitement with this set.

Could you tell us a little more about your DJ background, was there a specific moment when you decided that you wanted to play music for people?

My path to DJing is probably similar to many young DJs out there. My love for electronic music grew from influences of my friends and going clubbing. At some point, I started remembering tracks, found out about SoundCloud, and installed some digital DJ software on my computer. After starting to collect music I played my first set at a house party, then later got my first club booking. I’m always trying to manifest something that can be considered my signature sound, and that is an ongoing process that never stops.

Am I right in thinking you are just a DJ, and if that’s correct, do you find it’s harder to maintain a career without also producing?

The question is: “How far do you want to get?”. To reach the highest class of artists, these days it’s almost impossible to do that without releasing your own music at some point. I don’t really think in those career path terms, as it is not my goal to become a superstar DJ. I put my focus on fun and a passion for finding good music. Getting to know new people and places every weekend is a privilege for me, and that motivates me to keep working on my DJ skills. I don’t want to rule out producing my own releases, but it’s not something that I feel pressured to do.

What are some of the clubs and festivals you love playing the most, and why are those events so special?

I had some of my most intense moments in clubs such as Sisyphos (Berlin), Bahnwärter Thiel (Munich), Südpol (Hamburg), Rummels Bucht (Berlin) or So&So (Leipzig). Unfortunately, the last two I mentioned no longer exist. Those nightclubs have been really special and influential, but I don’t let myself get upset by things like that. Basically, I feel comfortable anywhere where everyone is valued equally, and a DJ gets as much respect as a bartender. Where the bouncers make sure there is a gender-equal balance of visitors. Where it’s all about the love for details, such as decoration, light, or sound, and not about big headliners. Where it’s about the moment and not about the next Instagram story. My favourite festival is Fusion, but I also love to be at smaller festivals that are less well-known, such as the Meeresrausch Festival, Freiland Festival, or the Zugvogel Festival.

Can you select two of your favourite tracks from the mix, and what makes those tracks so special, as we will also include them in our Spotify playlist?

The first song on the list would be “Zii – Drop It” as the track currently reflects the sound that I prefer to play. Second, I’ll take “Spencer Parker – My Heart”, because it is simply timeless, and I’ve definitely played it more than a hundred times, which means I have some great memories attached to it.

I think it would be good anywhere that was out in the open air on a warm summer’s day. House tracks with groovy basslines, paired with organic elements, is perfect for partying in the daytime.

Can you list a couple of other DJs that you find inspiring and are there any specific mixes of theirs that you could recommend we check out?

Two artists I’m sure you know that I would like to mention are ‘Powel’ and ‘Kora’. Regardless of their own productions and their skills on the decks, I appreciate both their attitudes and performance skills. I hate DJ posers that just press sync, then wear sunglasses indoors while throwing their hands in the air every time the music drops… those kinds of people always think they are the most special, but usually, they have the least skills. Powel and Kora are complete opposites to that, as without any ego they will calmly play some of the most amazing DJ sets you will ever hear. I’m happy to be able to call both of them friends and I’m grateful for every encounter we have together. I can also recommend ‘Ida Daugaard’, ‘Marlie’, ‘Soela’ and ‘Lauren Ritte’, as those are four artists whom I absorb every new DJ set they post on Soundcloud, and I’m always in admiration of their track selection and releases.

Thank you for having me! The time during the pandemic was not easy for me, but the support I received afterwards has been a real gift, and I hope that soon I’ll be able to thank all my supporters personally. Also, I hope that we can continue to hold on to our dreams and that at some point in history everyone will understand that war is not the solution to anything. 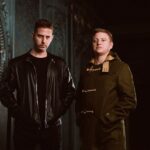 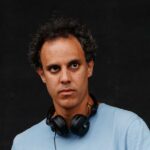