Oxia Is A French Artist Known Around The World For His Compelling Style of Melodic Techno.

Many first discovered him in the ‘00s via his iconic track “Domino” and he has continued to be one of electronic music‘s leading artists.

Releasing music on Kompakt, InFine, 8Bit and Bedrock his music has inspired dance floors across the world and he himself has proven to be an exceptionally talented DJ.

Whether he is performing on streams for brands like Cercle or headlining at a festival, he always delivers the same energy that fans have come to love and expect.

This exclusive podcast has been recorded especially for Flow Music, and we are excited to have the French maestro tantalise us with his mixing skills. He also took the time to answer a few questions to go alongside his DJ set…

It’s a pleasure, thank you for inviting me for your podcast series. As every mix I record, I proceed in much the same way, so depending on my mood at the time and my feeling. For this mix I started a bit quiet and then gradually built up, mixing melodic tracks with more rhythmic ones.

It’s always a bit difficult to choose one track in this case, because I like all the tracks in this mix, that’s why I play them 🙂

If I have to choose one, I’ll say the remix of my friend and label partner Nicolas Masseyeff of Quenum’s track ‘Dune’, which was released a few weeks ago on our label Diversions Music.
I also played another remix released on Diversions, it’s one of my remixes for Bizen Lopez released a few months ago. And another one of my remixes released in April, for Joseph Capriati’s track ‘Beautiful Morning’ from his album Metamorfosi released on his label Redimension.

So I have a track co-produced with my friend Yannick Baudino that will be released this summer on the summer compilation of All Day I Dream. There will be another track also produced with Yannick which will be released a little later, but it’s still a little early to tell you more. I have other tracks in the works but it’s still a bit early to tell you more also. Besides that I am preparing a new album.

Maybe for the beginning of the evening with friends to start the evening and to get in the mood. But it can also be in the car for a short trip. I don’t know if there is a best place 🙂

I always find it a bit difficult to answer this kind of question when you have to choose a favourite because there are always a lot of choices. However, I will talk about the DJs that influenced me a lot when I was young at the beginning of my career. There is Laurent Garnier, I like him for his open mind and his great musical culture. He was able to play a lot of different styles in a set and it always stayed coherent. He always knows how to create a particular atmosphere. There is also Jeff Mills, especially for his technique, the dynamics and energy of his sets. So those two DJs influenced me a lot, both for their different techniques and their open-mindedness. I also like to play different styles.

I hope they enjoy the mix, and I especially hope to see them on a dancefloor soon. I miss it and can’t wait to play in front of them again. And thanks for the support. 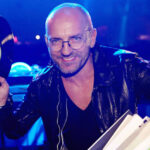 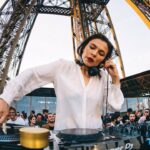