La Toilette are French nightclub promoters based in Paris.

Electronic Beats reports that the promoters hosted a rave in a car park next to a refugee camp run by United Migrants that was housing around 225 people.

United Migrants spoke about their experience to express the damaging effects that the event has had on them after La Toilette apparently mislead them.

People running the refugee camp were contacted around 4pm on Saturday the 4th of September with a request to throw a party at 12 AM the next day. The promotors requested use of the space near the camp, and if approved, said they would make a donation to help with the maintenance of the residence. La Toilette said there would be a maximum of 500 people at their event.

According to the statement published by Electronic Beats, La Toilette “broke every promise,” as the party started at 3am on Sunday the 5th of September, and before the promotors arrived there 1,500 people waiting for the party to start, and police had been called to attend following a number of complaints.

The situation was made worse on Monday the 6th of September when La Toilette shared a statement on Facebook that didn’t make any apology, and instead said that the party was being postponed to the following weekend. They then made what appears to be an unsubstantiated claim, that the manager of the United Migrants refugee housing had welcomed their postponement proposition.

By this point, partygoers were also outraged about the event, and expressed their anger in comments below the aforementioned Facebook post. Many partygoers wanting to know where their money is going, and why La Toilette chose that location in the first place. One comment read “We want proof of transfer of profits to the association which takes care of the migrants!,” then continues “When did you think it was okay to party next to their accommodation, for 20 hours!”

Another angry attendee wrote: “You can’t imagine how embarrassed I was to pay to have a party in a camp for people who fled their countries for political, climatic and social reasons because their lives were in danger. What is this madness?”

DJ Nymed is one of the DJs that was due to play at the event, and he shared a statement on Instagram, which references a short video that appeared on social media. This damning video shows a child from the camp with dance music from the party audible in the background.

Commenting on Instagram, DJ Nymed wrote “Dear queer people, yes it’s a little girl in the middle of a party this last Saturday night. What happened this weekend goes against all my values.” Read Nymed’s full post here.

Les Eveillés is an organisation that works to raise money for the refugees, and according to one of their members, the refugees living in the camp at Vitry-sur-Seine are now at risk of being evicted. Following the La Toilette party, a meeting has been called between the landlord, United Migrants and the local authorities. Giving a statement that reads: “La Toilette ran out of options and rushed into this alternative without caring about the consequences,” then continuing “Now the building’s future is even more uncertain.” 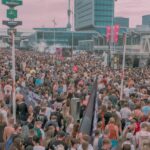 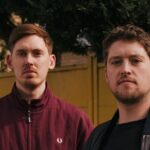