WOMADelaide is an Australian festival that celebrates different types of music and cultures from around the world.

It runs at Adelaide’s Botanic Park/ Tainmuntilla and amongst the line-up of bands and DJs are a few artists that caught the attention of the Flow Music team.

Bon Iver and MEUTE are two examples of bands that have an electronic music crossover. Bon Iver is an experimental band that mixes folk music and experimental production to create a sound that’s organic with trippy electronic elements.

MEUTE are the famed German marching band that transforms hit electronic music tracks into brass band tracks with upbeat energy. They consist of eleven drummers and horn players and their interpretations have gone viral on YouTube.

Although the festival is mainly oriented around bands, there is also a selection of DJs such as UK artist Jaguar who is well-known for her links to BBC Radio 1 and plays styles ranging from house to bass.

Nightmares On Wax are another UK artist playing a DJ set at the festival. Famed for their releases on the highly influential Warp Records, their downtempo style is a mixture of jazz, disco and house music.

Other DJs also performing include GUTS who is internationally known for his jazzy blend of world music, balearic and disco. 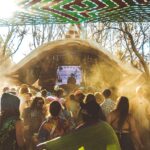 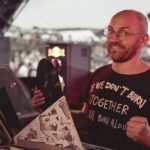