The singer has said he does not agree with events only allowing crowds that have proof of a vaccination.

Ian Brown has controversially pulled out of headlining a festival due to him not being happy about the event only allowing people to attend if they have received the COVID-19 vaccine.

The well-known singer first rose to fame as the frontman of The Stone Roses which blended acid house influences with indie rock in the early ’90s. They are held in high regard, alongside similar groups such as the Happy Mondays who pioneered a similar sound.

Still an influential performer and vocalist, Ian Brown has added vocals to numerous dance tracks, and also had a solo career with many of his tracks influenced by electronic music.

Many in the dance music world will recognise the UNKLE remix of his iconic track “F.E.A.R”. He is known for his outspoken and sometimes controversial opinions along with fighting crowd members or walking off stage during his performances.

He was originally down to headline the Neighbourhood Weekender at Warrington (UK) in September, but has now cancelled, and given a statement on Twitter that said: “My Saturday night headline show at NHBD Weekender Festival will now not happen! I refuse to accept vaccination proof as condition of entry. Refunds are available! X”.

My Saturday night headline show at NHBD Weekender Festival will now not happen! I refuse to accept vaccination proof as condition of entry.Refunds are available! X

Neighbourhood Weekender is yet to confirm whether its attendees would be expected to be vaccinated, but posted a statement on Twitter that said: “like all festivals, [we] will comply with the conditions outlined by the Government through the Local Authority. No decisions will be taken by Government until 21 June at the earliest.”

Ian Brown is a COVID-19 and lockdown sceptic, who on Twitter has regularly shared disinformation about coronavirus, anti-vaccine, anti-mask and anti-testing sentiment. He has campaigned against the possible use of the vaccine passport systems being considered by governments around the world.

The day following his announcement of not playing the Neighbourhood Weekender, Ian Brown urged festival promoters not to collaborate with the government on vaccine passports, describing their use as “the new nazi normal”.

Anyone who has watched the news to see the COVID-19 death toll should need little extra information to know that the pandemic is not an elaborate hoax or conspiracy, but social media allows people to speak their mind whatever their opinion. 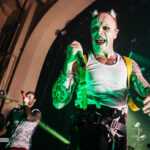