Victor Ruiz is a Brazilian techno artist known for his explosive style with driving percussion and immersive synth lines.

Travelling the world as a headline DJ, he has played leading festivals such as Awakenings in Amsterdam and iconic nightclubs such as Watergate in Berlin.

He is also a talented producer who has showcased his sound on iconic record labels ranging from Noir Music to Senso Sounds, but he is best known for his releases on Drumcode.

Drumcode is one of the main outlets for Victor Ruiz music, and he recently dropped a four-track EP on the label titled Beirut, which features four of his original productions.

Hi Victor, could you start by letting us know what part of the world you are currently living in, and what the local music scene is like this time of year?

“Hey there! Thanks for having me here. I’m currently based in Berlin, Germany. It’s been a beautiful and (much needed) warm summer until now, the city is buzzing and alive again. The local music scene – especially Electronic – in Berlin is very famous. You can basically go out and party any time or night of the week. The club scene is back on track and every weekend we have some of the best artists in town, so if you’re up for some great music you should definitely visit Berlin.”

You have made a career out of being an international DJ, which are some of the countries you enjoy visiting the most, and what do you love about those destinations?

“Oh, that’s a great question. Some of my favourite places are Colombia, Peru, Argentina, Brazil, Lebanon, India, Australia, Japan… The list could go on and on and yet there are so many places I haven’t been to and would love to go.  What I love the most about travelling, and these countries especially, is the people and the food. Experiencing different cultures and connecting with people, while having the most amazing culinary experiences are some of my favourite things on the planet. Along with flying.”

I’m told that you are passionate about flying, and also take an interest in the airplanes themselves. What is it about airplanes and flying that you find so appealing?

“My relationship with aviation is very interesting, because when I was younger, I was scared of flying. My first flight ever was when I was 20 years old, and I was panicking. Once I started to fly more and more, I knew I had to get used to it, otherwise that would be a problem. Thanks to my former tour manager Carlos and an AMAZING YouTube channel from Brazil named “Aviões e Músicas” (Airplanes and Music), I started to learn and understand the “magic” of flying, airplanes and everything that comes with it. The moment I understood that this is the safest way of transport, I immediately started to love it. There’s so much complex engineering involved and so many things that make it so endearing. And, let’s agree on that… How cool is that those gigantic pieces of metal can actually FLY? Still blows my mind every time. I could be here going on and on about details, so yeah… I’m pretty passionate about it!”

Do you have a favourite type of airplane, and why does that particular model stand out to you?

“”If it’s not Boeing, I’m not going” as the Aviation geeks say (me included). Jokes aside, I love Boeing. And that’s a big debate between aviation lovers. Rightfully so, but both Boeing and Airbus (the biggest airplane manufactures) are amazing. My favourite model is the B747-8, which was the first “jumbo” airplane. I just love it so much. We call it the Queen of the Skies. And I’m very excited I’m flying on it this Friday! :)”

Is there a memorable flight or flying story that you could share with us?

I could definitely talk about “scary” flight experiences, but it’s because I didn’t have information and they were just normal flights. Turbulence doesn’t make an airplane crash. Just to make that clear. I had many turbulences in my life, even a lightning striking on the plane, and it all went well. The planes are made to endure a lot and they’re quite good at that. LOL. I have a few great flight stories. My favorite is actually not so connected to the flight itself, but with the destination. My first time flying to Europe, which was with a B747-8. I’ll never forget that feeling. Those emotions. Discovering a new world. That’s the beauty of aviation – it makes all the distances in the world way shorter.

When is your next international gig, and are you playing any festivals this summer?

“My next one is a tour in North America that starts on the 8th of July and goes until the 16th. I’ll be going through Houston, Juarez, Guadalajara, San Francisco and Toronto. I just played Fusion Festival in Germany and it was an amazing experience. One of the best festivals on the planet. I’m also playing a few festivals including Echelon Festival, Sonne Monde Sterne Festival (both in Germany), Far Away Festival in Peru and I also just played Mystic Garden in The Netherlands.”

Talking of festivals, I recently heard your new release on Drumcode, and it certainly sounds like it will be popular on those main stages. Could you tell me about the release and its concept?

“The name of the EP is “Beirut”, named after one of my favourite cities. The main title track is very melodic and energetic, portraying a bit of the vibes of the city and its people. It’s very intense and beautiful. The second track, “Confession”, is a heavier, non-stop, kind of track. It has a synth line that goes throughout the whole length, bringing some eerie moments and odd vocals that I love. “Jurema” was inspired by the nature of my home country, Brazil, and the name is after a famous spiritual tree. It has many “forest” elements, all very organic, with some vocals in Portuguese. The final track is “Omen”. It’s a melodic stomper. It has driving and powerful drums, with a soaring, yet beautiful, bassline and some chopped vocals that even hint a bit of commercial electronic music.

“Coming back to Drumcode after almost two years, I wanted to make an EP that was a statement of all my musical range. Basically, all the kinds of productions that I like to make. And if you listen closely, you can feel me on each and every track of the release.”

What are some of the bits of equipment that were vital for the production of your latest EP?

“I produced everything in the box on this one. The synth I used the most was the Repro5, a very good emulation of the classic Prophet 5. The sound is so beautiful and fat at the same time. Most of the main bass and synth lines, I did using it. So simple yet so great. I used also Diva and Bazille. All of these 3 are from the same company, “u-he”. One of my favourites. Talking about hardware it was just my MacBook Pro, a sound card (UAD Apollo) and speakers (Neumann KH310) – assisted by my faithful headphones Sennheiser HD25.”

How did you first meet Adam Beyer, and how many times have you released on Drumcode?

“I met him at Awakenings Festival in Amsterdam in 2017. It was a short chat but it was nice. On that day he played 2 tracks of mine. I was very happy. A bit before that I was already sending him music, but only after that day we started the relationship. I’ve released on Drumcode six times. This is my seventh release there and I’m very excited.”

Thanks for taking the time to talk with me today, do you have a message for fans or anything else you would like to add before we finish?

“Thank you for having me, it was a great talk. I’d like to say that I know sometimes life is tough, and even when things don’t look that bright, know that this too shall pass and eventually you’ll come around. Always know that in every situation there’s a big lesson for you to learn. And everything happens for you, no to you. All the love! All the power!” 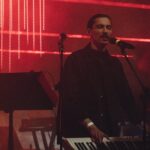 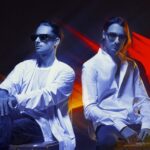