With XSPANCE having new music out now on Hydrogen, we take a look at his favourite tracks of the moment in the latest edition of What’s In Your Box?

Max Cooper, well, such a great way to start my top 10. A producer of the upmost talent on the electronic scene, and actually one of my favs right now. This is an ambient track with the most subtle textures and undertones which keep you there to the end. The track subtly builds with every single moment. It’s a truly stunning, unique piece of work, I can’t stop listening too….but really works it’s magic the last moments before sleep.

I recently discovered Niklas’s music and OMG, it’s something else. From what I’ve heard so far and in my opinion is up there with Jon Hopkins and Nils Frahm. This guy has stunned me with his brilliant productions that amalgamates both classical and electronic styles, but when I heard this remix by Harnes Kretzer of his track DAWN, I was blown away by its beauty. A piece of music I have on loop. Press play to see what I’m talking about!

Here is a maverick on the chillout, melodic, electronic scene, and was one of the first electronic producers I discovered. After listening to Ulrich’s debut album Far Away Trains Passing By released 2001, his unique sound instantly got me hooked which made me want to take up music production, and creating music of a similar elk. This track Shine feat. Vocals from Longview is still one of my favourites of his. You can drift away to this work of art anytime, anywhere.

Joey’s music has really inspired me in the development of my own sound and a producer I’ve been lucky enough to get to know and work with also. I adored the whole aurora of Everything is Alright when I first heard it and still do, the overall uplifting and melodic production is crafted with perfection so it was a pleasure to get the opportunity to remix such a piece of beauty. This track was one of the first remixes I took on and I still feel is one of my best so far, I guess because I loved the track so much. It’s not been released so I thought this would be a great opportunity to get it out there. As far as remixes go, this has to be a personal highlight for me, so I hope you like it.

Parade, what a track, I have revisited this one over and over and it never gets old. This one is from the awesome French producer Rone, taken from his album Tohu Bohu from 2012, as well as the whole LP a beautifully addictive melodic masterpiece, designed to let the ears swim amongst.

A beautiful and enchanting original track from Ólafur which I have been playing a hell of a lot recently, but, when I caught wind of this remix by Tontario, a Canadian producer I recently discovered and loved his style, I couldn’t wait to hear his version of this. To be expected Tontario delivers his excellent interpretation which definitely injects the original with a pulse but still retaining the tranquil charm of the gorgeous melody which lies beneath it all. It will keep you nodding throughout I’m sure.

This next track is from the recent and colossal Touched 3 compilation raising money for a great cause (Macmillan cancer support) and something I was also privileged and proud to contribute music too. Olan Mill is an ambient producer who creates music which resonates in you, leaving you feeling peaceful and calm. His ambient, captivating, journey-esq productions will draw on your imagination with the lush sounds he creates which will keep you hooked for sure. I would say, the perfect music to relax and unwind to after a long day at work.

Moderat / Let The Light In

Being a big fan of both Apparat and Modeselektor, It certainly made me a very happy chap when they teamed up to form Moderat, a synergy of electronic styles made in heaven, after listening to all 3 wonderful studio albums. It was hard to pick out a standout track of theirs as they all deliver big time, so I chose Let the Light In as it is not only melodically catchy but vocally creative and definitely leaves you wanting more.

Burial is an artist who has a supremely creative and experimental perception of electronic music like no other, I can’t get over the way he samples vocals too! Such depth and texture to his sound which makes him unique amongst the worlds electronic producers. When you hear his music it makes you feel like your floating in an bottomless echoing chasm. This recent release of his Young Death really demonstrates what I mean. This will certainly take you on a journey, so be prepared to let you mind wonder and thoughts disappear.

Crystal is music of dreams, this track takes you trekking across galaxies and beyond. A magical production and great to finish my current top 10 journey here courtesy of Change Underground and hopefully leaving you full of enlightenment.

‘Astronauts and Satellites’ is out now on Hydrogen, you can purchase the release: here 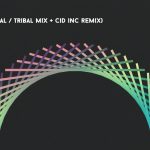