UMEK is a well-established techno producer who has been leaving his mark on the genre since the ‘90s and his latest release draws some inspiration from his classic sound.

Those who are old enough to remember UMEK’s tracks from two decades ago will be familiar with his highly influential Recycled Loops series, which was funky techno with percussive flair and simplistic grooves that were quite hypnotic.

The latest release by UMEK features a track called “Choice to Pursue” that has elements reminiscent of his classic sound, but blended with thickset modern production.

Choice to Pursue has a tribal percussion loop that forms the core of the track and a powerful bassline that’s swept by filters and morphed with modulation. The bassline is similar to what can be heard in some of UMEK’s more industrial-sounding classics such as “Lanicor”.

Although it is Choice to Pursue that instantly grabbed our attention from this release due to its timeless style that reminds us why UMEK is such a legend within the techno genre. The EP’s other track “Persona” is equally as impressive and not to be forgotten about.

Persona is a driving track that is in many ways the pinnacle of the modern techno sound. Its whopping percussion and pulsating bassline hold nothing back and the extended breakdown section is used to build suspense before an extra injection of energy.

You can pick up a copy of the track HERE 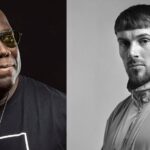