Held by the coast with great sea views, ruined buildings and lush green areas to camp on, it also boasts multiple stages of music across multiple days.

We were there this year and here are 7 of the best it had to offer.

We invite you to an exclusive section of The Advent playing a special live 90s set at NEOPOP. #KeepingTechnoSafe #NeopopFestival2019 #NeopopTV

UK techno legends The Advent played a set that harked back to their 90s heyday. It was 100 mil an hour techno funk with overdriven percussion, mad bass and plenty of ups and downs. It might have been an old school set but it felt thoroughly modern, new and fresh even in the daylight. The crowd lapped it up.

All the way from Medellín, Julianna took the Anti Stage by storm. Her electro-tinged sound was a real boon that lifted us off your feet and transported us into the next cosmos. Gurgling bass, crisp hits, seamless transitions – it was a real masterclass from a DJ who deserves every success.

The Bulgarian played on the Neo Stage and had a big bank of keys and outboard tools and gear to play on. He did so with all the usual energy you would expect of him, held bits of music-making equipment up to the crowds so they could see what he was doing and they loved it.

Another techno duo to make their mark were Roundhouse Kick. With plenty of energy, they bounce about in the booth, working in trippy synths and raw claps to their pummelling techno drum lines. Hypnotic and fresh, it felt like a very modern techno set and was a real winner as a result.

A huge screen of visuals backed this veteran duo as they worked their machines hard. From spritely uptempo techno to more squelchy and dark grooves they plotted a truly futuristic trip that kept theist crowd moving. It was a roller coaster ride with plenty of ups and downs and a real highlight overall.

This pair drew a vast crowd. The Ukraine Nastia and Daria Kolosova went back to back for a fierce two hours of driving techno. It was quick, sleek and groovy, with minimal interactions between the pair but plenty of standout moments that got hats in the air.

The final day at the Anti-Stage was opened up by these two deep digging and classy selectors. They played some far out jazz-tinged electronics, deeper, slower house end plenty in between. It was a great way to re-energise yourself for another day of action and came with warm, supple lighting to add to the vibes. 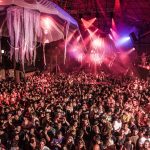 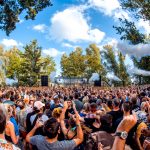