Josh Butler is a UK based DJ and producer who has released tracks on labels including Crosstown Rebels, Defected and Hot Creations.

Josh Butler had his first hit track in 2013 with his classic ‘Got A Feeling’ which won him awards from both Beatport and DJ Mag. Since then, he has continued to build on that success with numerous top selling tracks on highly respected record labels.

His career was spurred on further by his skill behind the decks, and the ability to whip the dance floor into a frenzy. Having now played sets all over the world, he has a truly international following with fans everywhere from Australia to Ibiza.

Recently, Josh Butler remixed Ferra Black’s track “West End” for the Adesso Music record label. Keen to learn more, we caught up with Josh to ask about his latest release, and passions outside of music…

Hi Josh, it’s great to be chatting with you today, are you still living in the UK, and have you been out clubbing since the country’s lockdown finished?

I arrived back in the UK a couple of weeks ago after spending 9 months in New Zealand. Good to be back and catch the end of summer. I played a couple of festivals last weekend, really good vibes!

Have you played any gigs in 2021, and if so… what was it like being back in a nightclub after so long?

I have played quite a lot this year actually, I’ve been quite lucky. I played some shows while in NZ then travelled back to the UK via the USA and did a tour over there. Love to see things getting back!

I understand you are someone who is passionate about staying fit and healthy, what kind of routine did you have for this during lockdown, and has it changed at all recently?

Yeah that’s right. I got so out of balance for a few years while touring so over the past 3 years made a big effort to get back on track. My lockdown consisted of one or two exercise routines a day whether that was cardio, calisthenics, weights, mobility/yoga would depend on my mood that day. Plus eating nothing but fresh home cooked food with veggies from the garden when I could.

I know lots of people found walking a great way to keep a clear head, do you do much walking yourself, and are there any specific places where you like to get out in nature?

I do quite a lot of walking, yeah. Being out in nature has always been a big part of my life as I grew up in rural New Zealand. When I’m in the UK I live near a big nature reserve and not far from the countryside, so can walk to open green landscapes quite easily 🙂

Moving back to your music, I understand you recently did a remix of Ferra Black’s track West End. How did this project come about?

That’s right. They got in touch with me asking if I’d like to remix the original. I loved the tribal/latin vibe of the track so knew I could add my own spin to it. Great to see it getting support from the likes of Joris Voorn and more.

What’s your process for approaching a remix, and what changes did you make to Ferra Black’s West End when making your version?

I will often select my favourite elements from the original then rebuild the whole track around it, using their elements as samples. That was the case for this remix with Ferra Black anyway 🙂

And tell us about your latest Change the Line EP, out now on Nicole Moudaber’s Mood Records?

Change the line EP was all written and recorded towards the end of 2019. I was just waiting to find the right home as it’s a little darker than some of my previous releases. Nicole and I have been friends for many years now and she’s always a big supporter of my music. So I actually couldn’t think of a better label for them to be released on.

I always find it interesting to compare someone’s production style to their DJ sets, are you someone who makes a conscious effort to have continuity between what you play and what you produce?

As I sort of mentioned above my production style can be quite varied. I’m 10 years into my production career now so it’s important for me to experiment and push the boundaries of our genre. I approach my dj sets in the same way. The vibe of my sets often depends on a few variables such as venue size, style the dj played before, how that worked with the crowd, the time of day/night can be a huge factor as well as my mood of course. So yeah I think they’re often pretty varied from Housey, summer vibes to those darker after hours sets and that variety is what keeps me so excited about electronic music.

When not working on music or exercising, what activities help you relax or unwind… could you recommend any good films or TV shows?

I am a bit of a workaholic to be honest so I quite rarely sit down and watch TV. I did watch a good film while travelling in the USA last month though called Boyhood (2014) which follows a family over the course of like 5/6 years. I read about it afterwards and it was actually the same actors through the whole film. Really wholesome and heartwarming I thought!

What’s coming next in your release schedule or are there any gigs you want to hype up?

Next month I will be releasing my debut EP on Knee Deep In Sound. I love what HS82 has done with that label so very excited about that. I’ll also be playing at Studio 338 in a couple of weeks as well as some other shows around the UK. Lots of other stuff happening too which you can of course keep up to date with on my social media pages.

Thanks for taking the time to chat, do you have a message for fans or anything you want to add before we finish?

My pleasure. Thanks to everyone who continues to support my journey through music, it’s been really amazing to reconnect with fans and music lovers on the dancefloor the last few months!

Josh Butler’s remix of Ferra Black’s “West End” is out now on Adesso Music, and you can grab a copy from HERE 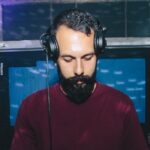 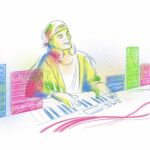