This summer Italy’s iconic Kappa Futur Festival is back for its 10th edition and they have announced the first wave of artists confirmed to take the stage – there are some familiar faces, some DJs making their Kappa Futur Festival debut and with lots more to be announced, it’s already shaping up to be one of the most expansive and impressive line-ups to date.

Returning again for 3 days, the festival kicks off Friday 30 June with a whole host of top DJ talent. Highlights include Italian duo Tale Of Us presenting their much hyped Afterlife stage plus the long-awaited return of Black Coffee and Major Lazer who last played the festival in 2015. Major Lazer goes B2B with Major League for an unmissable set plus making their festival debut – supergroup The Swedish House Mafia hit the stage with a very special techno set, exclusively for Kappa Futur Festival.

On Day 2 – Saturday 1 July don’t miss Detroit legend Carl Craig live, and following a huge set on main stage last summer, Diplo returns for his only Italian performance of 2023 – to go back-to-back with the one and only Maceo Plex. Plus the iconic Fatboy Slim returns along with so many more…

For the third and final day Sunday 2 July there’s another jam-packed schedule including Dennis Cruz B2B with Pawsa, Chris Liebing live, and a very special appearance from the one and only Carl Cox, who for the first time ever brings his must see Hybrid Live set to Turin. A sight to behold with Carl spinning the tunes DJing and performing tracks from his recent new album – completely live.

Following last summer’s sell out festival (over 85,000 tickets sold), which for the first time extended from two to three days, the award-winning event returns to Torino’s Parco Dora for another weekend of celebrations. And there’s lots to celebrate… The 2023 festival will mark their 10th anniversary edition – an incredible milestone for any festival and testament to how popular Kappa Futur Festival has become and how it has managed to sustain its reputation as one of the world’s best music festivals.

The 10th edition will be their most ambitious event yet with top class production, an un-beatable line up and lots of special celebrations for the 10th birthday – more details coming soon. Plus returning for 2023, the acclaimed Art & Techno experience along with other irresistible Gold VIP + Hotel packages. 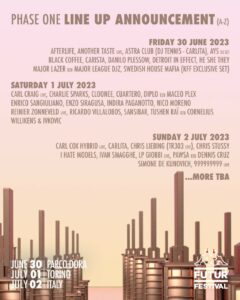 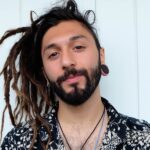 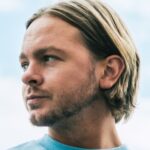