Doppel has been attracting a lot of support for his music from influential DJs such as Sasha, Eelka Kleijn, Sebastien Leger, Atish, Powel, Blond:ish and Armin Miran.

He has featured on labels such as Einmusika, and his next release is an 11 track album on Open Records, which is one of Australia’s leading electronic labels, this year is celebrating its 15th anniversary.

The album titled, “Eucalyptograph” is a reflection on our connection to nature, the digital world and our interpersonal relationships, woven together with Doppel’s trademark lush soundscapes, soaring melodics, intricate textures and deep rolling grooves.

Keen to learn more about the album, we caught up with the Australian for a chat…

How did you first start out in music? What influences you in the early stages of your career?

I’ve been noodling around on guitars, drums, pianos, tables etc since I was a kid. My influences were always from music, films, books and places in my imagination. It was all about escapism and exploration, I used to spend hours just jamming along to my favourite tunes with headphones on, in my own space. My influences and being are much more outward now – dancing, connection and the palpable energy of a group of people moving together but there will always be that internal element which I think is important to stay attuned to.

What have been some of your career highlights to date?

It’s been a dream since the beginning really and there have been so many amazing moments. I’ve been very lucky, but the first thing that springs to mind is the first time I played the Market stage at Rainbow Serpent. It was (still in many ways is) the biggest gig of my life and marked a huge step up in my confidence and feeling. Will be hard to top that one not only because it was huge and epic but for what it meant at the time. Aside from gigs – having the opportunity to meet and befriend so many people who I have looked up to and have inspired me. It’s really special to feel a part of something bigger than myself.

What themes were you looking to explore on your latest album?

I attribute our disconnection to the natural world with many of the issues that we face as a society and as a species, so the album is very much focused on that. It was inspired massively by the turmoil of bushfire and flood, especially around my hometown Canberra, the strange, disconnected limbo created by the pandemic and just an attempt to focus on and return to that connection.

Do you think there’s a disconnect between nature and electronic music, or music in general, as so much is produced in windowless studios using computers? If so, does it matter?

I say this all the time – one of the strangest mutations of this world of electronic music and outdoor festivals is the thought that so much of the music that is blasted out into the beautiful bush for people to dance to is written in dark, padded rooms full of machines by a guy sitting in a chair for 12 hours. I think it’s pretty easy for a creative person to use their imagination to project their music into the space they want it to be played in their own mind, but I think there’s no way that your environment doesn’t soak into the creative process and the creation. It’s hard to balance acoustics and natural light, and it depends on who you are and what type of music you write, but I personally need a bit of light and greenery (or even just air if the sun isn’t shining) and have tried to make my creative process a bit more playful.

As we look ahead to a more positive year for the music industry, what are you most looking forward to about the rest of 2021?

Off to a great start I think and there’s hope and excitement in the air. So happy to get the album out, the reception has been amazing and I’m so grateful to everyone who has supported, listened or offered kind words about it.

A few releases on the horizon including a collaborative EP with my brothers The Journey on Flow Music!! This EP flowed onto the page for us, it’s some of my favourite work to date and I’m so happy we found a home for it with the Flow family. Very excited for that one to hit the airwaves.

Thank you guys for having me! 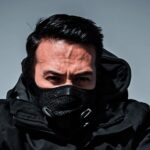