TSHA is a UK artist known for releases on labels such as Ninja Tune.

TSHA hits another pivotal milestone in her thrilling rise as one of the capital’s most exciting young talents. Three years on from her contribution to Bonobo’s ‘fabric presents’ compilation, she’s come full circle to mix her own volume in the prestigious series.

Since this initial breakthrough, the self-taught producer has proven herself to be a musical protégé, signing to Ninja Tune and releasing a string of groove-laden melodic originals including ‘Flowers’, ‘Sister’, ‘Power’ and ‘OnlyL’, which have topped charts and garnered acclaim from the likes of Billboard, Fader, RA and NME. The latter described her music as “emotion-filled electronic anthems from a star in the making”. At the end of 2021, she was deservedly announced as BBC Radio 1’s Breakthrough Artist of the Year.

Beyond the standout productions, TSHA’s musical spirit originates from club culture and a deeply rooted connection to dance music, born from years of exposure to house, UKG and rave records throughout her childhood. She gives credit to her mum and older brother for introducing her to an array of new and dynamic sounds from their personal collections whilst growing up.

As a result, her DJ sets bring an uplifting, future-facing energy, while simultaneously displaying a deep respect for vintage dance floor sounds and a classic raver spirit. It’s a presence that she’s transported into creating her ‘fabric presents’ work. “The idea of the mix is very acid house. I love the idea of old skool rave culture, the ethos around peace and love as well as the aesthetic that comes with it, so that’s what I wanted to bring with the mix. Lots of old skool vibes, which is the reason dance music exists – to break down barriers and bring people together.”

TSHA’s contribution to the fabric canon is a visceral snapshot of club culture past and present, touching upon rave, ‘90s dance, house, techno, UKG, soul, grime, disco and bass music. “I was trying to take it back to core dance music, which is about escapism and fun and connecting with people,” she shares.

You won’t recognise many of the artists on ‘fabric presents TSHA’ and that’s just the way she wants it. In the same way that Bonobo spotlighted her in 2019 when he included her track ‘Sacred’ on his compilation, the project marks a crucial ‘paying it forward’ opportunity, allowing TSHA to showcase emerging names via the mix.

“I really wanted to introduce people to artists they’d never heard of before and make it a platform, just like Bonobo did for me. He made people aware of me. A lot of the artists featured are ones who’ve randomly sent me music and they’ve always had an amazing reception, but some of them no one really knows about yet.”

She underscores rising Bristolian talent Gallegos whose vibe-heavy cut ‘Sycophantic Maniac’ is a favourite: “I’ve been playing it out for ages. He’s about and doing stuff, and not completely new. But that song, I’m quite obsessed with it.” Other notables include the heads-down minimal techno of Nicholson’s ‘1988’, the ‘90s rave flair of ‘FLOCK’ from UNCLE KNOWS and the grime-tinted ‘Norf’ from Aspect, that underlines the distinctly British club cultures sounds she wanted to pay tribute to with this mix.

“fabric is very British to me. I’m very proud of the dance music that comes out of the UK and how innovative we’ve been over the years in dance and electronic music in general. To me, fabric has been the face of this. I wanted to make sure this mix was an amalgamation of the different sound coming out of the UK.”

Another notable highlight is the exclusive new track from TSHA herself titled ‘BOYZ’, which is available now. Showcasing elements of bass, house and techno, this exclusive single is laden with her trademark organic grooves. “I already had the loop down when I got asked to do this, so I thought it was a good foundation. I’m mashing lots of elements together and it has a big sound. It reminds me of fabric.”

Out now, you can pick up a copy HERE 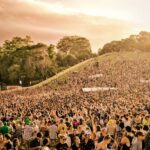 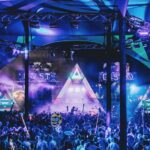